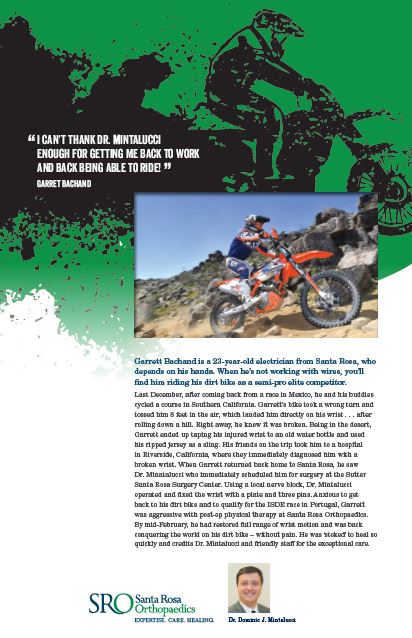 Garrett Bachand is a 23-year-old electrician from Santa Rosa, who depends on his hands. When he’s not working with wires, you’ll find him riding his dirt bike as a semi-pro elite competitor. Last December, after coming back from a race in Mexico, he and his buddies cycled a course in Southern California. Garrett’s bike took a wrong turn and tossed him 8 feet in the air, which landed him directly on his wrist . . . after rolling down a hill. Right away, he knew it was broken. Being in the desert, Garrett ended up taping his injured wrist to an old water bottle and used his ripped jersey as a sling.

I can’t thank Dr. Mintalucci enough for getting me back to work and back being able to ride! ~Garret Bachand

His friends on the trip took him to a hospital in Riverside, California, where they immediately diagnosed him with a broken wrist. When Garrett returned back home to Santa Rosa, he saw Dr. Minatalucci who immediately scheduled him for surgery at the Sutter Santa Rosa Surgery Center. Using a local nerve block, Dr. Mintalucci operated and fixed the wrist with a plate and three pins. Anxious to get back to his dirt bike and to qualify for the ISDE race in Portugal, Garrett was aggressive with post-op physical therapy at Santa Rosa Orthopaedics.

By mid-February, he had restored full range of wrist motion and was back conquering the world on his dirt bike – without pain. He was ‘stoked’ to heal so quickly and credits Dr. Mintalucci and friendly staff for the exceptional care. 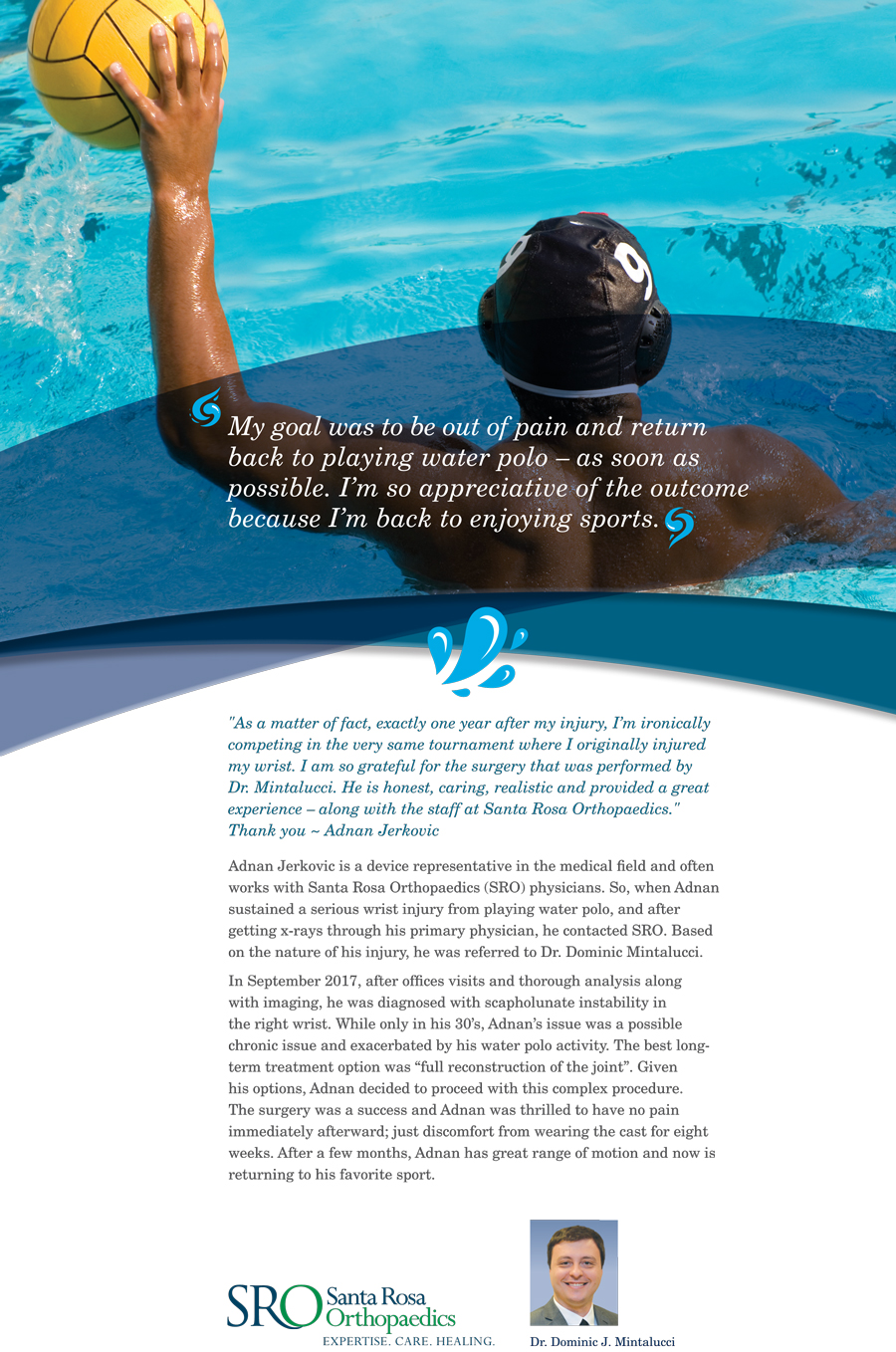 Adnan Jerkovic is a device representative in the medical field and often works with Santa Rosa Orthopaedics (SRO) physicians. So, when Adnan sustained a serious wrist injury from playing water polo, and after getting x-rays through his primary physician, he contacted SRO. Based on the nature of his injury, he was referred to Dr. Dominic Mintalucci.

In September 2017, after offices visits and thorough analysis along with imaging, he was diagnosed with scapholunate instability in
the right wrist. While only in his 30’s, Adnan’s issue was a possible chronic issue and exacerbated by his water polo activity. The best longterm treatment option was “full reconstruction of the joint”. Given his options, Adnan decided to proceed with this complex procedure. The surgery was a success and Adnan was thrilled to have no pain immediately afterward; just discomfort from wearing the cast for eight weeks. After a few months, Adnan has great range of motion and now is returning to his favorite sport.

“As a matter of fact, exactly one year after my injury, I’m ironically competing in the very same tournament where I originally injured my wrist. I am so grateful for the surgery that was performed by Dr. Mintalucci. He is honest, caring, realistic and provided a great experience – along with the staff at Santa Rosa Orthopaedics.” Thank you ~ Adnan Jerkovic