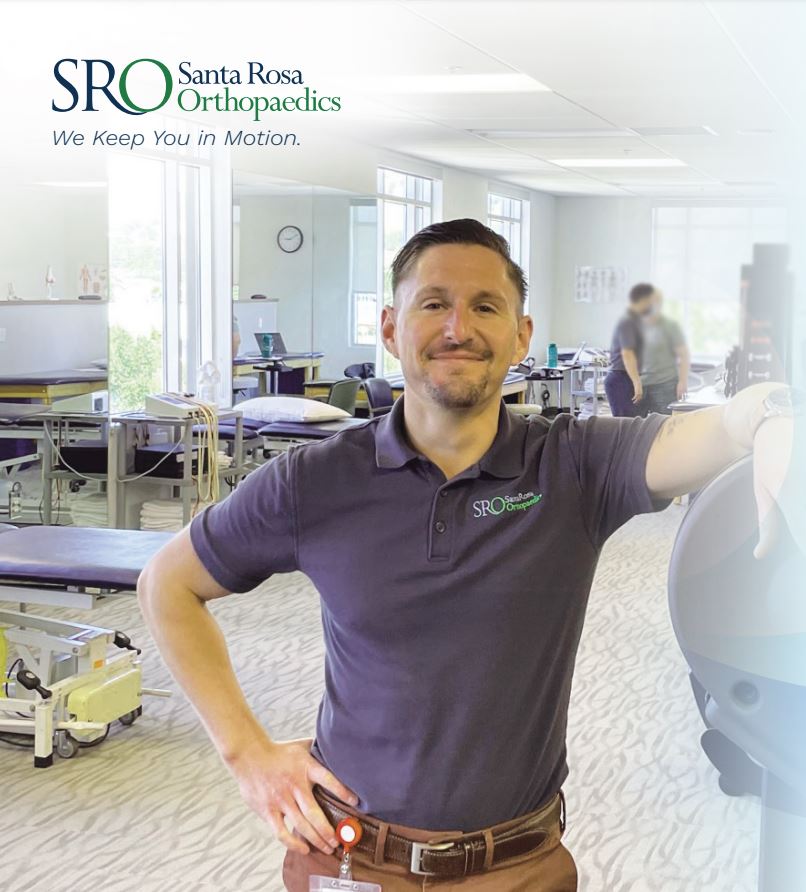 It would probably come as no surprise to those who work with Dr. Hayden Block, PT, at Santa Rosa Orthopaedics that he was elected team captain all four years of his high school water polo career. For Block, it was just a harbinger of the leadership qualities that would see him join SRO in September 2021, and within two months, be named the director of rehabilitation services. That role has him overseeing a department of some 20 clinical and administrative staff while also tending to the 12-15 patients per day that physical therapists consider a regular workload. It all makes for an industrious professional life for the 30-year-old, who, if his upbringing and academic and work history are any indication, wouldn’t have it any other way.

Born in Martinez to a nurse educator mother and sales executive father, Block is the youngest of four children. An older sister preceded twin brothers two years his senior.

“My brothers protected me but sometimes bullied me, too,” he says, laughing. “The tables finally shifted when I started building muscle mass by lifting weights, and we became friends instead.” (More laughter.) Moving to San Luis Obispo after high school graduation to attend Cuesta Junior College, he joined the water polo team but more importantly, took his first anatomy class and “fell in love with the human body.”

Baseball, soccer, frisbee, water polo and other sports had been woven into his life since almost before he could remember, but studying the science of the actual muscles, bones, nerves, and other bodily components that provide the very foundation of movement itself catapulted him into a whole new appreciation for physical existence—and a distinct aspiration to align his career and personal life with it.

Part of that aspiration included a painful but well-considered end to his water polo career so he could focus all his energy on academics and the employment that would complement it.

“I played half a season at Cuesta but realized two things. At that level, it has to become your life, and second, being 5’8” and 160 pounds, I was too small and at a serious disadvantage to the taller and heavier guys who dominate the sport. So, I made the decision to leave.”

Not that he had much time to grieve. He had started working at a nutrition supply store within weeks of moving to San Luis Obispo, learning as much as he could about nutrition and supplements, and he never stopped the running, hiking, swimming and regular weightlifting that remain his exercise stalwarts today.

“It seemed I was always the one friend in my group who had work responsibilities,” he says. “We’d be out late, and I’d be the one getting up at 6 a.m. to go to a job. My parents both worked hard. I remember my dad always saying, ‘Do it, get it done, finalize your checklist.’ It sunk in with me.”

From Cuesta it was on to Cal State, Sacramento for his bachelor’s degree in exercise science, with a minor in kinesiology.

Working as a personal trainer at a family-owned gym—with a clientele that began coming through the door at 4 a.m.—he continued putting the pieces of his emerging orientation together, noting a distinct expansion of his knowledge base in science, nutrition, and exercise, along with his “skill development in human movement.”

Going back to the gym for more clients or his own exercise at night, he locked the doors before opening them again when 4 a.m. rolled around. Rinse, repeat, it’s just what the Hayden Blocks of the world do to pursue their dreams.

Those dreams included an obvious next destination after his stop in Sacramento: A Doctor of Physical Therapy degree (DPT) —the highest educational attainment in his field. It required a move to southern California for an intensive three-year course of study and clinical rotations at Azusa Pacific University (just east of Los Angeles.) Accompanied, of course, by a 20-hour weekly workload leading group exercise sessions and fitness bootcamps.

“The DPT degree is pretty intense, and they tell you not to try working at the same time, but I had always worked,” he says. “So, I was the only one out of 48 people in my program who did, but it worked out O.K. I have always been fortunate to have jobs directly related to what I was studying.”

The prized DPT degree in hand, he migrated back north to a clinic in Santa Cruz for several years before he and SRO found each other in 2021. It didn’t hurt that one of his twin brothers and his children live in Santa Rosa, with the rest of his family close enough by in the Bay Area to afford close, ongoing contact.

“I’m very family-oriented,” he says. “Right now, I get to be a fun uncle. It’s a great role.” Behind Block’s admiration for the human body lies a philosophy in which he sees it as “a movement system designed to be comfortable and in alignment. My role is to assess that movement and treat any dysfunctional aspects that may have crept in over the years and are stressing the system.”

The often under-appreciated peril is that any misalignment—a head hunched forward far ahead of the shoulders from too much computer use, an awkward gait developed after a childhood injury—becomes habituated and dramatically intensifies the strain on the musculoskeletal system over time.

“Let’s say we take 6,000 steps a day,” he says. “If one leg is for some reason swinging too wide, most all the rest of your body will have to compensate. And that leg will endure 3,000 steps of dysfunctional movement every day. Month after month, year after year. Your tissue will fight back as long as it can—until it reaches a failure point.”

The failure most often comes in the form of chronic pain that sends a person to their doctor, seeking relief. What Block does, however, is less to do with hands-on therapy than it is teaching patients how to correct misalignment and faulty movement patterns so that the problems don’t resurface within months of their physical therapy ending.

“Look, everyone loves massage, and direct soft tissue manipulation is great,” he says. “It feels good and has a therapeutic effect. But if you go right back out in the world repeating the same movement that caused you pain in the first place, it won’t be long before it returns. So, I see my role less as hands-on, and more as training and educating people to get to the root of the problem.

“I think of myself as being a doctor of human movement, always emphasizing, ‘How are you moving?’”

Occasionally, that question begets an unexpected answer. He cites an example of a patient coming to him in distress with long-term foot and heel pain. A common diagnosis that a family doctor would use to refer the patient to physical therapy for those symptoms is plantar fasciitis, an inflammation of the tissue running from the heel to the toes. Treatment always includes stretching exercises targeted to that area.

During his routine assessment, however, Block heard that the person’s job required driving a car 6-8 hours a day. Examining him later on a table, he discovered quite the opposite of someone with tight plantar fascia requiring stretching. Rather, the man’s left foot had been extended over many months if not years down near the car’s pedals.

“This person actually had too much length in his soft tissue,” Block says. “Six to eight hours a day really adds up! So we had to go the other way with him to build up strength and density. More stretching of that area was the last thing he needed.”

Block recalls an early professor and mentor of his boiling things down for him in a class lecture: “If I pound my knuckle hard on a wall every day, it will start hurting and eventually grow calcium deposits and cause bone movement. You can try to treat the problem, but the real solution is: ‘Let’s stop banging our knuckle.’”

And so, it is with all manner of pain and not-quite-rightness that afflicts our mortal bodies in modern life. Only part of the problem is in what we do. Much more problematic is how often—with both mind- and body-numbing repetition—we do it.

“Movement is just another habit—like riding a bike or swinging a bat,” says Block. “My job is first to look at the whole person as they come in to see me, noticing everything about them but paying closest attention to how they move, how they sit, stand, get on equipment or get off the floor. Then give them the training tools they need to keep good movement habits in place for the rest of their lives.”